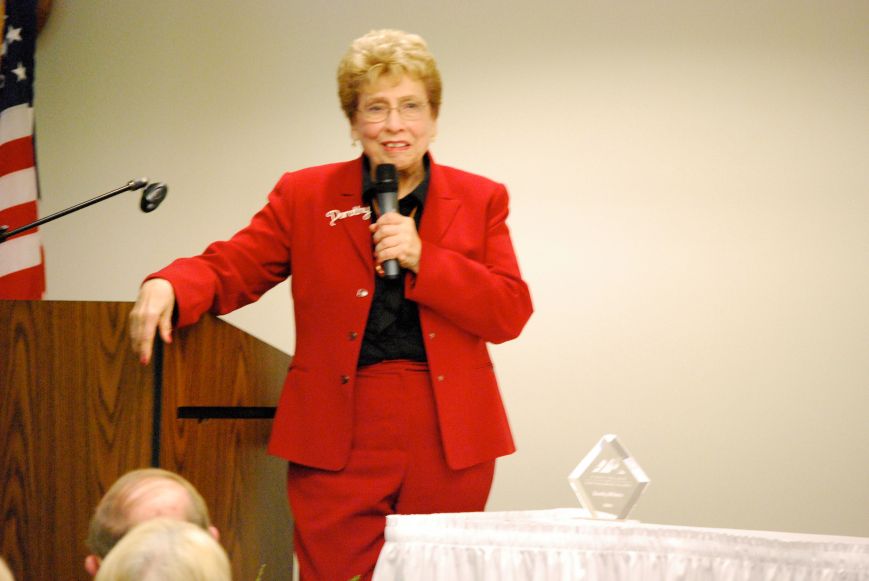 Over 100 people enjoyed a history talk by Dorothy Wilhelm, seen here at a previous presentation.

Dorothy Wilhelm, a popular newspaper columnist from DuPont, calls herself a “geriatric cheerleader,” and now we know why. She absolutely wowed the crowd at our February 18 monthly free history talk at the Schmidt House, where she presented stories from her upcoming History Press book tentatively titled Lost Stories from Washington History. Dorothy’s presentation for our “Heritage Builders” program dealt with legends and personal stories she has collected over many years. She has interviewed people all around western Washington for her award-winning TV series My Home Town, one episode of which covered our historic town of Tumwater.

Public History Manager and program host Don Trosper commented, “I knew Dorothy would be a good speaker and story-teller, but I didn’t realize how good she really was.” He added, “Since the house filled up early with visitors, Dorothy, on her own, decided to begin informally speaking to the audience 20 minutes early as a kind of warm-up. I raced to the front and turned on her microphone and before I knew it she had me up there with her giving a spontaneous and unscripted humor-filled preview of her formal talk.” Robert Kam of TCTV, who was recording the event for Tumwater’s local access channel 26, decided to roll the camera early to capture some of the wonderful lead-up to her formal presentation. He said it was just too good to miss. It remains to be seen how much of that warm-up will be included on TCTV or YouTube.

“I’ve never seen such a response from those attending,” Don said. “I had many folks asking that we bring her back in the future. I’m sure we can arrange that for 2017.”

Next month’s free noon-hour talk will be on March 24 with Don Trosper and our curator Karen Johnson sharing some of the treasures from our wonderful Schmidt House collection.

Doors open for the public at 11:15 a.m. Come early for seating. Once the room capacity is reached, admission is closed. But you can always watch past programs on TCTV or on YouTube at:  Online History Talks