What could be more disappointing than poking your nose down into a sumptuous rose, taking a deep sniff, and coming up empty? No fragrance!  – You might as well be growing dahlias (no offense to you dahlia growers).

When people learn that you have been growing roses for 30 years, as I have, they often comment: “…these modern roses are not as fragrant as the roses I remember when I was young”. Any honest Rosarian will have to admit that there is some truth to this statement. The Old Garden Roses, the ones your grandmother nurtured in her garden, possessed an overpowering fragrance. This fragrance to die for was part of their immense charm. In fact in olden times roses, and the valuable perfume they contained, were often important objects of commerce and even conflicts such as the “War of the Roses” in 15th century England.

Today, however, it seems that relatively few modern roses possess the intense fragrance of the Old Garden Roses. The reasons for this are many, but they boil down to one simple fact: for centuries rose breeders have selected and bred roses for form and color, not fragrance. Each time a breeder adds another characteristic to the list of selected traits, the selection intensity for all traits decreases. So breeders pick one or two to focus on. Flower color used to dominate, while more recently disease resistance has become very important. But fragrance has not been specifically selected for – it sometimes just comes along as a bonus.

But do not despair! All modern roses are not devoid of fragrance. In fact, there are many cultivars of hybrid tea roses growing today in The Centennial Rose Garden that have scent rivaling, or even surpassing, that of the old roses. In this blog we’ll take a look at some of these (visit www.olyrose.org and click on Centennial Rose Garden) to find a  map showing where these roses are located). 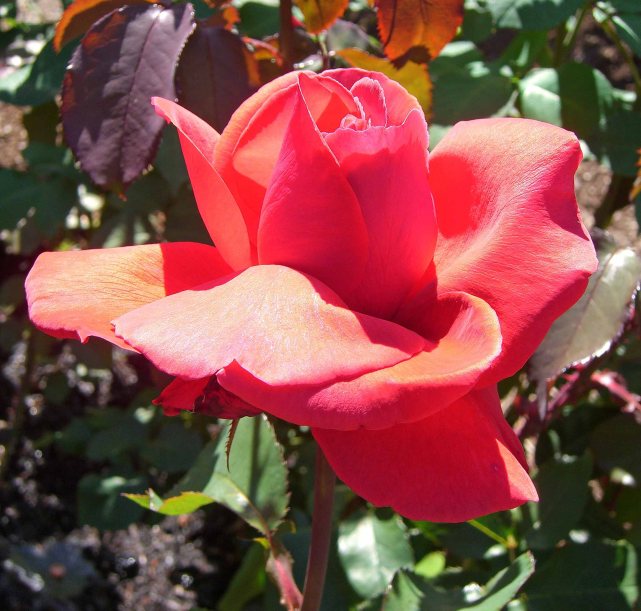 Fragrant cloud (Figure 1).  A perfect name for a near-perfect rose.  Smoky red, sultry, and elegant, this rose was introduced way back in 1967. Fragrant cloud was one of the first roses I ever owned and it remains in my rose garden to this day – mainly because of its heavenly fragrance.

Electron (Figure 2). If you like pink, you’ll like Electron. Big, pink, and fragrant, Electron has held its popularity since its introduction in 1971. And it’s easy to see why. She is a very generous bloom producer with a nice spicy scent. But be careful of the thorns!

Double delight (Figure 3). Many gardeners call Double Delight their “favorite” rose. It’s tall and vigorous and yields up generous quantities of beautiful white centered roses, the petal margins tipped with brilliant red. But it’s the overpowering fragrance of this rose that wins over so many people. Having been around for quite a while (1976) it is often featured in garden stores and nurseries owing to its popularity.

A few final thoughts on fragrance. Rose fragrance results from volatile chemicals produced in the flower petals which, under certain conditions, tend to evaporate producing fragrance. Fragrance is not constant. It may be muted in the cool of morning, while later in the day, after exposure to warmth and light, it can reach its peak. So test for fragrance when it’s warm and the volatile oils are evaporating. I have also noticed that fragrance often tends to be stronger after roses are cut and taken indoors. I’m not certain why this is. And roses tend to become more fragrant as they age, and sometimes the nature of the fragrance also changes with age. Again, why this happens is a mystery to me.

But one thing is certain, if you poke your nose down into one of the roses listed above, you will not come up disappointed.

2 thoughts on “Fragrant hybrid tea roses in the Centennial Garden”