Earlier this summer, a production crew from NBC filmed local musician Ethan Tucker in Tumwater Falls Park for the television show “The Voice”

Ethan Tucker may only be in his early 20s but the self-starting Olympia native has already made a name for himself, impressing some of the more respected veteran artists in today’s music world. Performing and recording since the age of 16, Tucker has honed his unique blend of acoustic-roots, soul, blues, and reggae, slowly building a dedicated and ever-growing audience, and making friends with some significant musicians in the process.

Ethan chose country music artist Blake Shelton as his coach after his succesful audition on the September 20, 2016 “The Voice” broadcast. 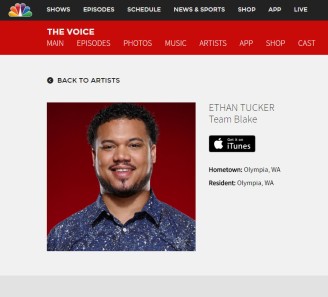 This week’s (September 20) “Blind Auditions” episodes of “The Voice” were prerecorded in Los Angeles, as was the coming “Battles” episode that will feature Tucker in October. If he makes it far enough, he will sing live on national television during the final “Live Shows” competition, which will include voting by the TV audience.